The Book of Mormon is coming to New York City to grace the Eugene O'Neill Theatre stage with their multiple award winning showstopper. The Book of Mormon follows the story of two missionaries who are sent from Salt Lake City to teach in a remote Ugandan village. Written by Stone, Parker and Avenue Q's co-creator Robert Lopez, the show is directed by Parker and Casey Nicholaw. The Broadway performance won nine Tony awards last year! Get ready to experience The Book of Mormon live in theater and get your tickets today!

The famous fathers of South Park said that the story of the musical came about from their backgrounds growing up in Colorado where they became closely familiar with The Church of Jesus Christ of Latter-Day Saints and its members. They used their knowledge as well as their famous skill at weaving social commentary, comedy, and satire into a story that lampoons the feel-good inspirational musical formula while still staying true to its roots and origins.

The shock comic geniuses tell a story of two Latter-Day Saints missionaries who are on a mission to spread the word of the Church of Jesus Christ of Latter-Day Saints to a remote Ugandan village. But what they discover is a remote world that is less concerned with faith and more concerned with HIV/AIDS, Female Genital Mutilation, and village warlords. From the opening song, “Hello!”, audiences are transported into a world with a lot of heart that shows that even in the middle of the absurd, you can find a well of compassion.

The Book of Mormon has received incredible praise for its plot, score, and performances, with Vogue magazine describing it as “…the surprise-sweetest thing you’ll see on Broadway this year, and quite possibly the funniest musical ever.” The New York Post reports that audience members were “sore from laughing so hard” calling it tuneful and hilarious. Ben Brantley of The New York Times has even compared it favorably to classic musicals “The King and I” and “The Sound of Music”, stating its ability to weave sunny tunes to dark topics and themes something close to a miracle.

This is your best opportunity to see the incredible Book of Mormon live at the Eugene O'Neill Theatre in New York City, New York on Wednesday 2nd June 2021! 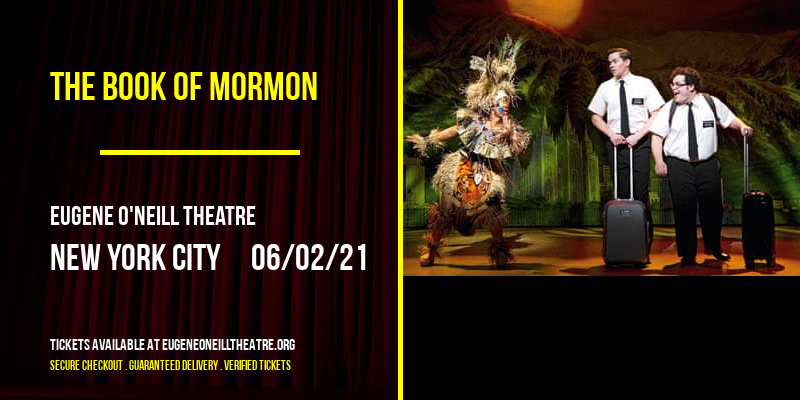