This July, the world-famous sensation The Book of Mormon will be performing live on stage at the illustrious Eugene O'Neill Theatre on Saturday 17th July 2021. The Book of Mormon follows the story of two missionaries who are sent from Salt Lake City to teach in a remote Ugandan village. Written by Stone, Parker and Avenue Q's co-creator Robert Lopez, the performance is directed by Parker and Casey Nicholaw. The Broadway performance won nine Tony awards last year! Tickets are already selling like crazy, so we advise you get yours ASAP. This musical is certainly going to be one of the favorite events the Eugene O'Neill Theatre has put on in all of 2021. So get your family together and come on down to the Eugene O'Neill Theatre this July!

The famous fathers of South Park said that the story of the musical came about from their backgrounds growing up in Colorado where they became intimately familiar with The Church of Jesus Christ of Latter-Day Saints and its members. They used their experience as well as their famous skill at weaving social commentary, comedy, and satire into a story that lampoons the feel-good inspirational musical formula while still sticking true to its roots and origins.

The surprising comic geniuses tell a story of two Latter-Day Saints missionaries who are on a mission to spread the word of the Church of Jesus Christ of Latter-Day Saints to a remote Ugandan village. But what they find is a remote world that is less concerned with faith and more concerned with HIV/AIDS, Female Genital Mutilation, and village warlords. From the very first song, “Hello!”, audiences are transported into a world with a lot of heart that shows that even in the middle of the absurd, you can find a well of compassion.

This is your only chance to catch the incredible Book of Mormon live at the Eugene O'Neill Theatre in New York City, New York on Saturday 17th July 2021! 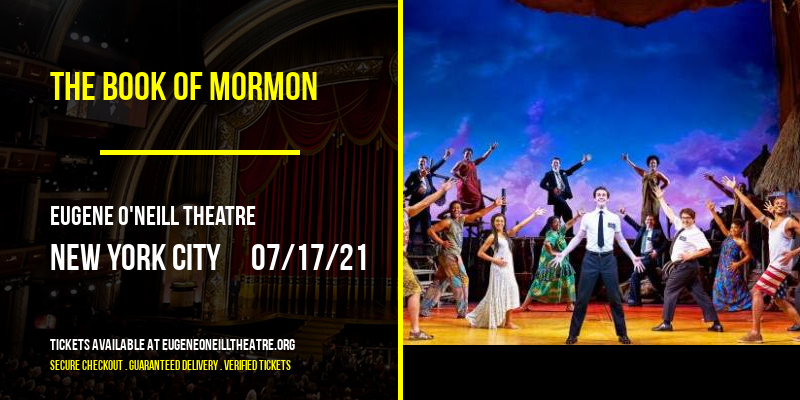