If you love top-quality theatrical productions, then you can’t miss-out when The Book of Mormon brings their unrivalled talent and one-of-a-kind authenticity back to New York City, New York to perform live on the stunning Eugene O'Neill Theatre stage. The Book of Mormon follows the story of two missionaries who are sent from Salt Lake City to preach in a remote Ugandan village. Written by Stone, Parker and Avenue Q's co-creator Robert Lopez, the performance is directed by Parker and Casey Nicholaw. The Broadway show won nine Tony awards last year! So if you want the very best in musical theatre, then you want to visit the Eugene O'Neill Theatre for their latest show, the Grammy Award Winning, The Book of Mormon, live! Click the Buy Tickets button below and book yourself the best seats in the house for this event!

Trey Parker and Matt Stone, creators of South Park, Orgazmo, and Cannibal! The Musical, join the creative talents of Robert Lopez to create “The Book of Mormon”, one of this season’s filthiest, most hilarious, and surprisingly sweet musicals on Broadway Today! This musical comes hot off the heels of the satirical brilliance of South Park episode “All About Mormons” as well as the “Super Best Friends” to tell a story that lampoons and celebrates the Mormon faith.

This combination of extremely dark themes and inspirational messages comes together in a way that Ben Brantley of The New York Times has compared favorably to Rodgers and Hammerstein classic “The King and I”. He has even said that its “…setting these dark elements to sunny melodies…achieves something like a miracle. It both makes fun of and heavily embraces the all-American art form of the inspirational book musical.” Jon Stewart has even had nothing but praise to give to the creators for the play during a March 10, 2011 episode of The Daily Show that first talks about the production.

If you want to watch this award-winning and universally acclaimed production for yourself, then catch The Book of Mormon live at the world famous Eugene O'Neill Theatre in New York City, New York on Friday 11th June 2021! 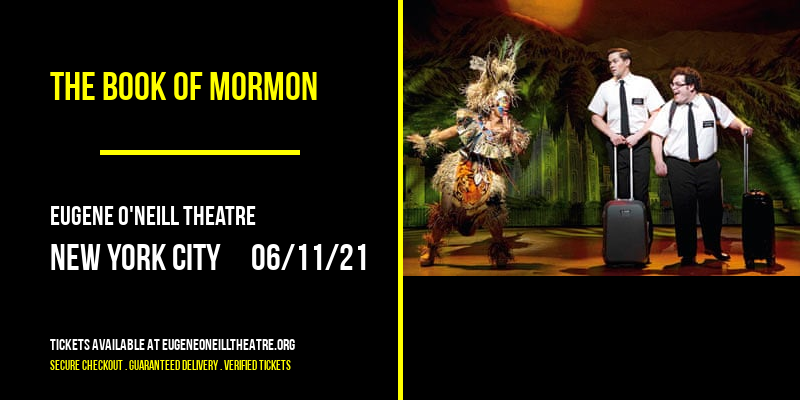