This June, the iconic sensation The Book of Mormon will be performing live on stage at the breathtaking Eugene O'Neill Theatre on Saturday 5th June 2021. The Book of Mormon follows the story of two missionaries who are sent from Salt Lake City to preach in a remote Ugandan village. Written by Stone, Parker and Avenue Q's co-creator Robert Lopez, the musical is directed by Parker and Casey Nicholaw. The Broadway show won nine Tony awards last year! Tickets are already selling like crazy, so we suggest you buy yours ASAP. This show is surely going to be one of the supreme events the Eugene O'Neill Theatre has delivered in all of 2021. So get your family together and come on down to the Eugene O'Neill Theatre this June!

South Park’s creators Trey Parker and Matt Stone join forces with Robert Lopez to tell a filthy, offensive, and charming story with their latest Broadway production “The book of Mormon.” The story follows two Latter-Day Saints missionaries on their mission to spread the faith to a remote Ugandan village that isn’t interested in their message because they have more pressing concerns to think about with HIV/AIDS, Famine, and village warlords coming to the top of the list. The faith and determination of our heroes are tried and tested in a story that from beginning to end will keep you gripped, engaged, and laughing so hard that you might just be in tears.

Ever since it’s first debut run, the play has received near-universal acclaim. The Daily Show’s John Stewart had nothing but praise to offer the creators when they came to an interview on March 10, 2011. Vogue Magazine called it the most surprise-sweetest thing you can watch on Broadway. Ben Brantley of The New York Times compares the performance favorably with The King and I and The Sound of Music, calling its handling of music and themes something like a miracle. Writers have even said that no other production has so successfully managed sunny songs with darker themes since Mel Brooks’ The Producers nearly a decade earlier.

That’s why the iconic Eugene O'Neill Theatre of New York City, New York is proud to host this stunning production to their audiences this coming Saturday 5th June 2021. So if you want to experience the laugh-out-loud musical of the season, then make sure you come see The Book of Mormon. It may be the funniest musical you’ll see in 2021! 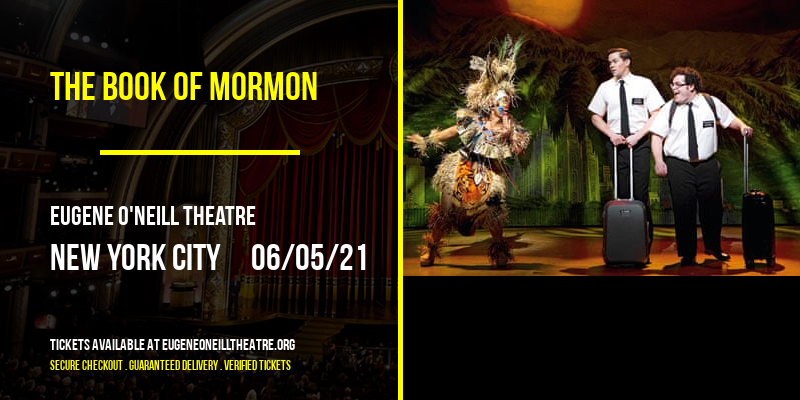